Cannabis, canals and carnal pursuits pretty much sum up the tourist’s image of Amsterdam. And you really can’t blame them when Google serves up “Tips for Getting Stoned like a Pro” or “Best Places for Cannabis Shopping” when you type in “Amsterdam travel.”

In the capital of the Netherlands, you will learn the big difference between a coffeeshop, which sells weed, and a coffee shop, which sells coffee. You will see prostitution in a different light at the, well, Red Light District, and realize how everything is strictly business in this part of the world, just as it has been hundreds of years ago when the merchant city was built.

Where else can you find the finest handmade juices next to a specialty condoms store?

But Amsterdam has Van Gogh, Rembrandt and Anne Frank, too. If, like me, you have little interest in smoking joints, fret not—you can still experience a high in Amsterdam. The city is loaded with interesting streets, colorful flea markets, great museums and cool places to just chill and watch those happy folk go by.

Despite what people might think—with Amsterdam’s anything-goes attitude—safety is not an issue here. According to The Economist’s Safe Cities Index 2015, Amsterdam is the fifth safest city in the world. 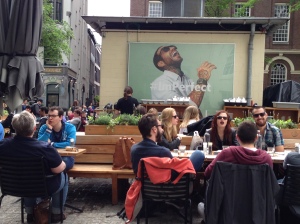 Chill seems to be the default mode in Amsterdam.

True enough, Amsterdam had some of the friendliest people we’ve encountered during our tour of several European cities. Always, someone would be willing to help you with directions or greet you on the tram (never mind that they would say “Ni Hao!” to every Asian, thinking they were Chinese). At the Hotel NH Museum Quarter, where we stayed, the front desk lady was so nice she even mailed a package for me after we checked out.

Besides befriending Amsterdammers, here are other nice things you can do in one of the world’s greatest small cities:

The average Amsterdammer owns at least two bikes, so yup, that’s more bikes than people in this city.

Get on a bike

The one thing you can’t escape in Amsterdam are bikes – almost a million of them. According to Amsterdamfaq.com, there are more bikes (881,000) than people (742,000) or cars (263,000) in Amsterdam. That’s not hard to believe, considering most residents have two bikes each. Add to that the 12,000- 15,000 bikes being fished up from city’s canals every year, thanks to drunk driving and parking.

You can either rent a bike during your stay or join a bike tour of the city. Either way, you will feel like a local because bikers own the roads in Amsterdam. In the city, bikes account for 50 percent of traffic.

If you’re traveling before 2017, you have time to experience the beer bikes or party bikes. These are vehicles where riders sit around a center bar drinking booze while pedaling to make the vehicle move. Amsterdam will ban these beer bikes in the city center beginning 2017 due to accidents and complaints from residents. 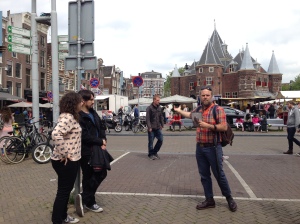 If biking isn’t your thing, then just take a walk. Amsterdam is famous for its streets, and there are a number of free walking tours to guide you in exploring them. Most of the tours assemble at Dam Square in the morning. While they are advertised as “free,” the walking tours “encourage” participants to give a tip of at least 10 euros each.

That’s worth knowing Amsterdam’s history and culture as you walk along the famous De 9 Straatjes (Nine Streets) and the Jordaan guided by locals. They will show you where you can score free wine-tasting, buy authentic Holland cheese and find good second-hand books. Most tours will also take you through the Red Light District where you may still find prostitutes working in the morning. Try not to stare, and whatever you do, do NOT take their pictures. Those scantily dressed seductresses on the display window are allowed by law to smash your camera.

The line to that historic gray house is loooong but absolutely worth it. Nothing will tug at your heart more.

Nothing, however, will tug at your heart like the Anne Frank House, which tells the story of Anne Frank, the Jewish girl whose diary chronicled their years of hiding from the Nazis with the help of Dutch friends. The house on Prinsengracht that once hid the Franks and two other Jewish families is now a museum. Book online because tickets run out months ahead.

There’s a reason over three million people go on a canal cruise of Amsterdam every year.

Amsterdam has 165 canals, and with the exception of the stinking ones in the Red Light District, they are the reason Amsterdam is known as one of the most romantic cities in Europe. If you can afford those pricey hotels along the canal ring, inscribed as a Unesco World Heritage Site, then by all means, stay in one. Otherwise, book a canal cruise. It’s one of the best ways to experience Amsterdam and see its centuries-old buildings in the old town, which National Geographic has described as “one of Europe’s best preserved, photogenic, and intact historic city centers.”

Okay, fine, go to a coffeeshop

Just to be clear, it’s legal to buy marijuana at coffeeshops in Amsterdam, but smoking it in public is illegal (although this is hardly enforced). Most coffeeshops allow you to smoke in their premises, but it’s best to ask just the same. Also, the legal limit for marijuana purchase is 5 g per person.