Everything in Kyoto is old.

Our private guide, Shihoko Hirooka, was 73. My entire family’s jaw dropped when she entered the hotel lobby and introduced herself as the one who will shepherd our group of nine, young, hyper-excited tourists.

“This is our guide?” my sister Abbie whispered as she pulled me aside and cast me a worried look. “That woman is older than Ma and Pa! We’ll be walking the whole day…”

Shihoko’s website boasted of her more than 30 years of experience as a tour guide in Japan, so I knew our guide wouldn’t be young. But I didn’t imagine she would be this old, either.

“So, are you from Kyoto?” I asked Shihoko as we walked to the train station. It was a lame attempt at conversation but somebody had to talk—my companions were still in shock that our guide was as old as my grandmother.

“Well, I’ve lived here for 40 years, but I can’t really say I’m from here. In Kyoto, for you to be able to say that you are from here, you should have had generations of your family living in Kyoto,” she said.

Generations, centuries, something-hundred B.C.—these were units of measurement I would hear much of during our five days in this former Japanese capital.

Exhibit A: our first stop, the Fushimi Inari shrine, was built in the 8th century, before the capital of Japan was moved to Kyoto in 794. Dedicated to the rice god Inari, Fushimi Inari has been described as among the most important of the 40,000 Shinto shrines in Japan, where 90 percent of the population are known to believe in Shintoism.

Although Shintoism has become more of a cultural heritage than a religion, the Japanese, who are also Buddhists, are still known to practice its rituals. Babies are dedicated in Shinto shrines and families still visit during important holidays. When we arrived, men and women in suits were solemnly praying before the shrine.

The Fushimi Inari shrine is famous for its tori gates.

“You have to ring the bell, bow twice, clap your hands twice and then bow again,” Shihoko said.

Aside from its spiritual significance, Fushimi Inari is famous for its thousands of tori gates, often the backdrop of pictures of visitors to Kyoto. There are at least 5,000 tori gates here, donated by rich people and big companies. The gates are painted bright orange because the Japanese didn’t want to use red, the Chinese’s color for happiness, Shihoko said, citing the historical hostilities between Japan and China.

Exhibit B: Nijo castle is the home of the Tokugawa Ieyasu, the first of the Tokugawa shoguns that ruled Japan from the 1600s to the 1800s. By the standards of Japanese palaces, this World Heritage site elicits none of the hyperbolic gushes, but the main building, which is made of and held entirely by wood—no nails or metal support—is a sight to behold, and its gardens are great for a stroll.

In fact, the gardens of Nijo Castle held the last cherry blossoms for us who were a little too late for spring. And so despite the ongoing repairs that made some buildings of Nijo castle off-limits, our Sakura pictures at the gardens were worth the ¥600 entrance.

Exhibit C: Arashiyama, which is famous for its natural beauty in the spring and autumn, has been a favorite holiday destination for Japan’s nobles since 794 B.C. We fell right into the tourist trap of riding the Sagano Scenic Train, but because we were too late for spring and a season too early for autumn, there was no scene to dazzle. I think renting a bike would be the best way to explore Arashiyama’s ancient streets, with their well-preserved Meiji-period houses, and its famous bamboo grove

Shihoko said the bamboo grove belonged to a community of farmers who make products like chopsticks, and cook bamboo shoots, a household favorite in Kyoto.

“Every day, at dawn, the farmers would walk through the grove and listen to their steps. Based on the sound of their steps on the ground, they would know which bamboo shoot is ripe for picking,” Shihoko said. “They have this rare bond with the bamboo. They listen and they know.”

Locals in traditional kimonos check out a hop on the way to Kiyomizu-dera.

Now I don’t know whether bamboos really bond with humans or vice versa, but I would not argue that Arashiyama’s bamboo grove is the perfect place to take a walk at any time of the day. It was cool in the afternoon, with only a glint of sun getting through the tall bamboos. Maybe it’s all that green, but the place has a calming effect. This is where you go to clear your head.

Exhibit D: The Kiyomizu-dera (Pure Water) temple offers arguably the best view of Kyoto from its wooden terrace, which juts out from a hill. But that’s not why it’s my favorite spot in a city with an endless list of poetically beautiful spots.

Built in 780, Kiyomizu-dera stands in Higashiyama, one of the best-preserved traditional Japanese districts in Kyoto. The approach to the temple requires walking up a gentle slope lined with quaint shops selling all kinds of souvenirs and Japanese knick-knacks.

Studio Ghibli, the oriental equivalent of Walt Disney with much better story lines and animation, has a shop dedicated to its famous characters. A huge stuffed Totoro welcomes fans as music from original Ghibli movies plays in the background. My husband spent the entire time in this one shop and emerged with little things that are now staring at me from my desk at home.

Even monks and locals are charmed by the Kiyomizu-dera temple.

Exhibit E: If you had only 24 hours in Kyoto, you should spend the day in Higashiyama and the night in Gion, home of the geiko (called geisha in most parts of Japan) and maiko (geiko-in-training), and you would know the heart of Kyoto.

Gion is where tourists become paparazzis, and the geiko (arts child) and maiko (dance child) become celebrities. Some shield their painted faces but others graciously oblige tourists for photographs.

If you can’t afford to shell out thousands of yen for a tea ceremony with a geiko in one of the ochaya (teahouse) or watch the annual spring show prepared by the geiko schools, then wait out on the streets. One is bound to pass by. As with all things Japanese, respect is premium, so be very polite when you ask for a photo.

When the day ends, and you hail a taxi to take you back to your hotel while your 73-year-old guide walks back to the train station, you know who’s old. ### 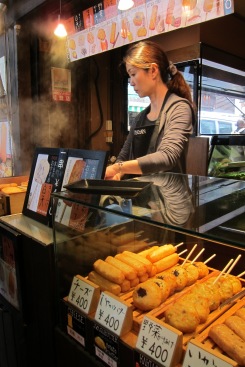 The Lord will fulfill His purpose for me; your steadfast O Lord endures forever.